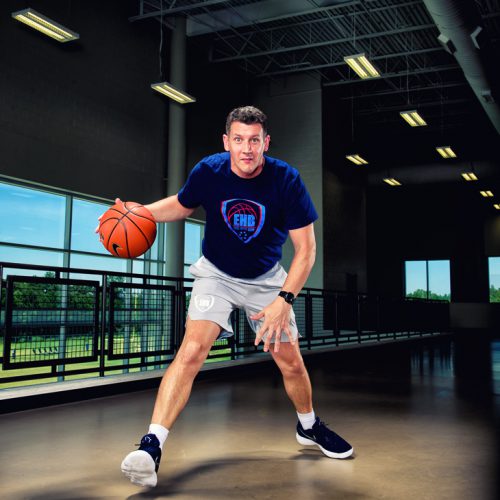 Along with his camp expertise, Miller had a brief stint as a walk-on at the University of Georgia in 1998. That lead to him working alongside former UGA Head Coach and 1995 Coach of the Year Jim Harrick while serving as a student assistant at UGA from 1999-2001. There he worked with former Detroit Piston Jarvis Hayes, former Philadelphia 76er Damien Wilkins and current Atlanta Hawks General Manager Travis Schlenk. During the 2002 and 2007 Final Fours in Atlanta, Miller was on staff for the NCAA’s YES Clinics.

From 2001-2003, Miller served as an assistant coach at Blessed Trinity High School in Roswell, GA.  As an assistant at South Gwinnett High School from 2004-2006, Miller helped lead the team to two state tournament appearances.  In 2004, they were ranked as high as #2 in USA Today and played in two nationally televised games.  Their star player, Lou Williams, now plays with the Atlanta Hawk s. Nine other players from that team went on to play collegiate ball.

During the 2006-2007 campaign, Miller coached at Norcross High School. They featured five Division I signees and concluded the season with the 5A State Championship, a 29-3 record, and ranked #12 by USA Today. While at Norcross, Miller had the opportunity to work with NBA Lottery Pick Al-Farouq Aminu of the Chicago Bulls and Gani Lawal who was drafted by the Phoenix Suns. During the summer of 2007, Miller worked at the Kobe Bryant NIKE Skills Academy in Santa Ana, CA at Mater Dei High School that featured 20 of the top high school guards in the country along with 10 of the top collegiate guards.

Miller spent the 2008 season coaching at Georgia State University in Atlanta, Georgia where he worked under 2001 Naismith Coach of the Year, Rod Barnes. In August of 2009, Miller completed a Skill Development Certification Class in Orlando, Florida taught by NIKE Skills Trainer, Ganon Baker.

During the winter of 2011, Miller and his Elite Hoops staff trained high school and professional players throughout Italy on a 10-day excursion. Two years later, he and his team spent a week in Germany with some of the area’s top players, and in January 2015 Elite Hoops was invited to train the teams at John Paul College in Brisbane, Australia over a 2 week period.

Since 2009, Miller has trained over 1500 players, 113 of which have gone on to play at the Division I level. One of which was the 2011 AJC High School Player of the Year and 2017 NBA Rookie of the Year, Malcolm Brogdon of the Indiana Pacers. Miller also worked extensively for 4 years with 2014 Georgia Gatorade Player of the Year, Isaiah Wilkins. From 2011-2015, he trained current Minnesota Timberwolve Malik Beasley and Charlotte Hornet Kobi Simmons as they played high school basketball in metro Atlanta.

In the spring of 2021, Miller brought the Nigerian Women’s Olympic Team into EHB Chamblee to train for one week prior to competing in the 2020 Tokyo Olympics.