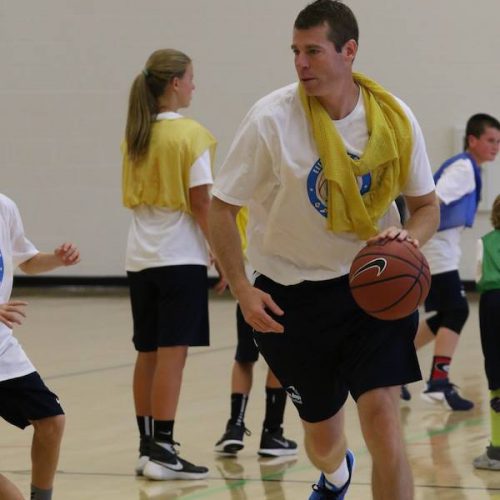 Patrick Drew Maddux is a native of Tennessee and presently resides with his wife, Tara, and daughters, Emma, Ava, and Sarah James, and sons, Patrick and Nicholas, in Nashville, Tennessee. Mr. Maddux graduated from Vanderbilt University in 1998, where he received a Bachelor of Science degree in Human and Organizational Development.

While at Vanderbilt, Maddux was a four-year starter for the Commodores basketball team. During his career, Maddux received several individual awards for his performance, both on and off the court. Some of the noteworthy honors he received include: ALL-SEC Freshman, USA Olympic Festival Team, First-Team ALL-SEC, and Honorable Mention ALL-AMERICA honors. Maddux was also an Academic ALL-SEC member, as well as being recognized as one of the Outstanding Young Men of America in 1998.

After graduation from Vanderbilt University, Maddux served in several capacities within Faz-Nash, the local franchisee of Fazoli’s restaurants in Middle Tennessee, and eventually in 2000 moved into the position of Executive Vice President. His job functions included managing the daily operational activities of all the Fazoli’s stores, as well as facilitating site locations and the development and construction of new units. Furthermore, Maddux managed the entire marketing efforts and community affairs for Fazoli’s.

In 2002, Mr. Maddux served as a Sales Executive for Eclipsys Corp., Inc. (NASDAQ: ECLP). Eclipsys is the leader of next generation clinical and financial information systems for healthcare organizations with revenues of over $300 Million. His focuses included the management of the sales and marketing efforts of the entire portfolio of solutions for Eclipsys in the Tennessee and Southeast markets. Additionally, Maddux managed the national sales and marketing efforts for Eclipsys in the emerging for-profit sector. In 2003, Maddux received the Documented Outcomes Sales Award- the top honor in the Company.

Additionally, in 2005, Mr. Maddux pursued his passion of basketball and entertainment and has served as a college basketball television analyst for networks such as Comcast Sports, Fox Sports South, and affiliates of WB, UPN, and Fox throughout the Southeast. Beginning in January 2005 as well, Mr. Maddux began serving as co-host of his own radio show on 104.5 FM “The Zone”- the leading sports talk radio station in Nashville, TN. Since 2007, Maddux has served as a college basketball studio analyst for the Fox affiliate show titled “Sports Zone” and on the ESPN affiliate 102.5 “The Game”. Maddux just completed his 10h year as serving as a college basketball analyst. Beginning in 2012, Maddux joined the #1 ranked college sports radio show in America on Sirius/XM Radio on 247Sports Radio’s on Campus with Bill King.

In addition to his professional career, Maddux is very active in the Nashville community. He serves on the Board of Directors for the Joe C. Davis YMCA Center, Vanderbilt’s National Commodore Club, the PENCIL Foundation, Chairman of the 2020 Board, and has served as President of the Rebounder’s, Vanderbilt Basketball’s former Letterman Club. Maddux has also served as a Volunteer Assistant Basketball Coach at Goodpasture High School, where he was a three-time All-State performer and graduate in 1994.

In 2008, Maddux was selected and included in the prestigious Princeton Premier for his accomplishments over the course of his life. In 2012, Maddux was selected and honored at the SEC Tournament in New Orleans as a recipient of the Allstate SEC Basketball Legends Award for his accomplishments both on and off the court during his career. Mr. Maddux and his family presently are members at West End Community Church.